(Note: Additional materials will be added to this website as they are developed and become available.)

This first-ever Hawaii-specific study was prepared for the Hawaii State Energy Office by the University of Hawaii’s Economic Research Organization (UHERO) as part of Act 122, Session Laws of Hawaii 2019. In authorizing the study, the Hawaii State Legislature stated that “climate change [was] expected to cost the State at least $19,000,000,000 in losses from sea level rise alone, making the switch to renewable energy and the ultimate reduction of atmospheric carbon a priority.”

The Hawaii State Energy Office contracted with UHERO to complete the study.

The study includes an illustrative range of tax amounts to explore options for achieving Hawaii’s policy goals. The Hawaii-specific modeling scenarios are important for deliberations at the Legislature and to further public understanding of how carbon pricing could address the climate crisis, while enhancing Hawaii’s economy and caring for the most vulnerable among us.

Between the commencement of the study and the release of this draft final Carbon Pricing Assessment for Hawaii: Economic and Greenhouse Gas Impacts, the global COVID-19 pandemic emerged, bringing with it unprecedented global health and economic crises. Hawaii has been one of the hardest economically impacted states in the U.S., with UHERO recently reporting the “statewide unemployment rate remains more than twice the national average.” (Go to University of Hawaii News, UHERO article.) Therefore, there are significant differences between the economic conditions in which this study was first designed and the pandemic-influenced economic circumstances of 2021.

While the study does not speak to economic recovery, the study offers insights at this critical time. The world is grappling with how to ensure no one is left behind in the clean energy revolution. This report demonstrates that a tax on greenhouse gas pollution and a direct payment to Hawaii’s households, when structured correctly, would help households–especially our most vulnerable–in the move to a clean energy economy.

The next step after this study is the careful consideration of the details of a proposed policy, such as how, when, and to whom a direct payment would be distributed, the timing and amounts, and sufficient notice to everyone to prepare for it.

Key Takeaways from the Study

(Note: The Biden Administration plans to update how it calculates the social cost of carbon.)

How Would a Carbon Tax Work in Hawaii? 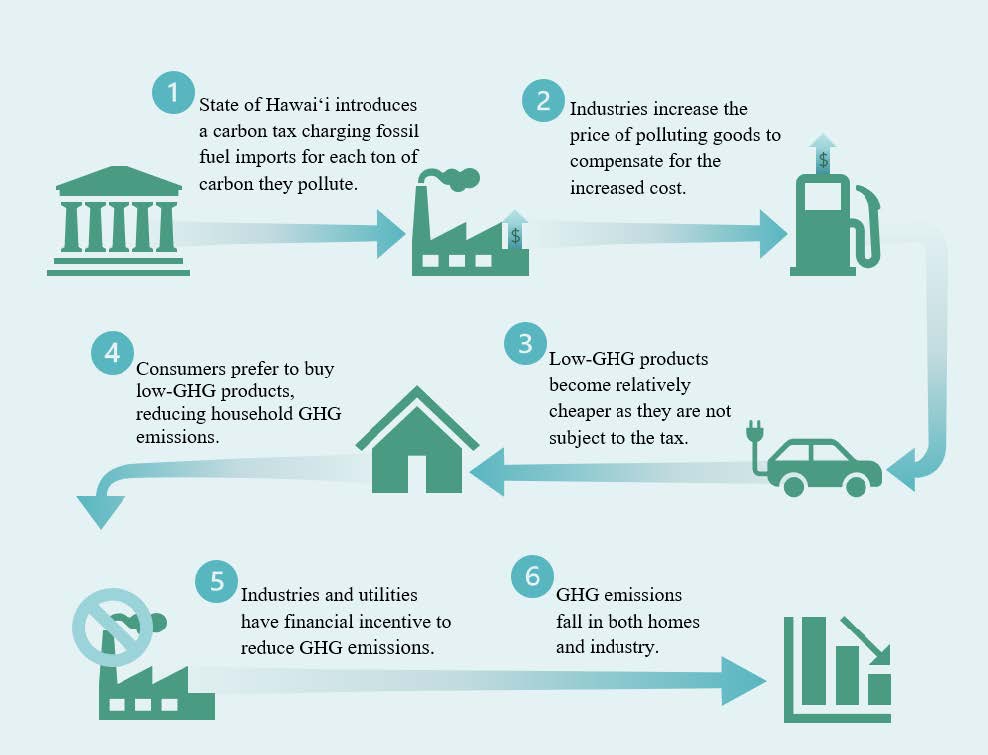 Carbon Tax and Revenue Recycling Options Considered in the Study