Opportunities to Provide Input and Learn More About the Projects

HSEO seeks to post public input opportunities for each project as they are announced.

In 2015, Hawaiʻi enacted a law that requires Hawaiʻi’s electric utility companies to sell only (100%) renewable energy to their customers by 2045 (Act 97) — the first such mandate in the United States complicated by fact that Hawaiʻi cannot import electricity from other states. The island of Kauaʻi is powered by a utility cooperative owned by Kauaʻi energy users, the Kauaʻi Island Utility Cooperative (KIUC), which achieved 67% renewable energy generation in 2020. The islands of Oʻahu, Molokaʻi, Lānaʻi, Maui, and Hawaiʻi are powered by a shareholder-owned public utility, Hawaiian Electric, which achieved a collective 34.5% renewable energy generation in 2020: 30.5% on Oʻahu, 50.8 in Maui County, and 43.4% on Hawaiʻi Island. The island of Oʻahu consumed about 72% of Hawaiʻi’s total electricity demand in 2020.

Hawaiʻi’s fossil fuel power plants have provided reliable electricity to Hawaiʻi residents for decades, but they are old, inefficient, and rely on fossil fuels extracted and imported from other countries or states at prices that fluctuate and are expected to increase in the future. Liquid fossil fuels are transported across the Pacific Ocean and are offloaded in waters off Oʻahu before being refined, repackaged, and barged to other islands. This results in a tenuous energy situation that depends on factors outside Hawaiʻi’s control. Electric bills in Hawaiʻi average more than twice the rate of any other state in the United States. In addition, vessels of liquid fossil fuel moving throughout the Hawaiian Islands regularly pose a risk to the marine environment. Further, the burning of fossil fuels contributes to the state’s greenhouse gas emissions, which contributes to the global climate crisis. Many solutions are needed to displace this significant amount of energy including use reductions (energy efficiency), widespread rooftop photovoltaic (PV) adoption, other customer-sited solutions, and utility-scale renewable energy projects.

Hawaiian Electric is seeking solutions to displace the significant and dated fossil fuel power plants that currently serve Hawaiʻi including: (1) by September 1, 2022, the 180-megawatt (MW) Coal Plant at Campbell Industrial Park on Oʻahu, which is the state’s only coal-powered power plant and provides approximately 16% of Oʻahu’s electrical energy during peak demand; and, (2) by the end of 2024, the 38 MW oil-fired Kahului power plant in Kahului owned and operated by Hawaiian Electric, which provides approximately 15% of Maui island’s firm power generation capacity. 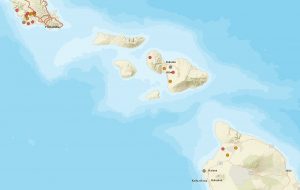 This website provides information and opportunities for public input on the 20 utility-scale renewable energy projects selected by Hawaiian Electric on Oʻahu (10 projects), Maui (6 projects), and Hawaiʻi Island (4 projects).  Of the 20 total projects in both Stages, 18 would be built, owned, and operated by private developers. Hawaiian Electric would build, own, and operate the Waena and Keahole battery storage projects.

Each new utility-scale renewable energy project must be submitted to the PUC for review and decision. Some of these projects have been approved by the PUC, others are currently under review. An individual PUC docket has been created for each utility-scale renewable energy project listed on this website. The PUC docket process is in open forum that allows for public comment at any time in the proceeding. In addition, each project must obtain the requisite federal, state, and county permits and approvals, many of which offer opportunity for public comment. HSEO’s Renewable Energy Projects Directory and Hawaiian Electric’s Renewable Project Status Board provide additional information on these projects and other utility-scale projects now under development or construction, approved by the PUC, or awaiting PUC approval throughout Hawaiian Electric’s service area.

Information published by HSEO for all projects comes from public sources of information only.